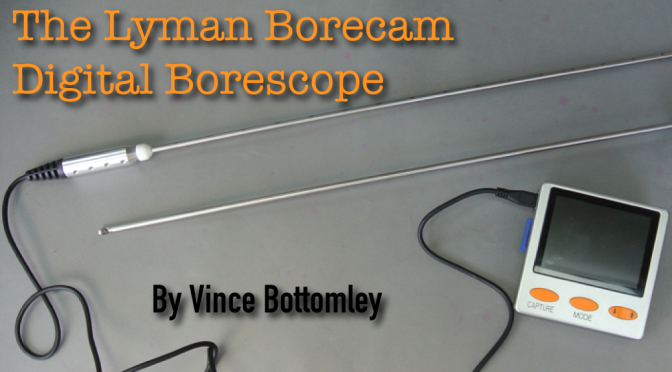 About 12 years ago, I bought a bore-scope. It’s something I had always wanted – but the hefty price-tag had always stopped me taking the plunge but then, the value of the dollar plummeted and I jumped-in with both feet and bought the basic Hawkeye kit made by the Gradient Lens Corporation USA. With postage, import-duty and VAT it cost me a little over £300 but I’ve never regretted the purchase and, like so many things, you soon begin to wonder how you managed without it!

If I were to replace my borescope today with another Hawkeye, it would cost me well over £700 – stick on a video adapter and we are looking at four figures……That’s what makes the new Lyman digital borescope so attractive – at around £250 including a monitor – it’s an absolute steal!

But £250 – with a video attachment and photo-capture facility – can this really be a useable borescope? Trust me it is! But what use is a borescope. Why do you need one? Well, can you imagine driving a car if you could never look at the tyres? Are they worn, under inflated, damaged etc?

Surely, whatever you shoot, the condition of your rifle’s bore is critical. And I’m not just talking about a bore that’s ‘shot-out’ – maybe you just aren’t cleaning it thoroughly. Or maybe some defect within the chamber or rifling is preventing your rifle delivering the kind of performance you expect. Even at £700, a borescope can be cost-effective – if it saves you the cost of just one new barrel.

Here’s an example. A customer started to have difficulty chambering rounds in his 308 Target Rifle. He has shot the same rifle, with exactly the same bullet, dies etc. for many years. He is a fanatical bore-cleaner – the type who never puts a dirty rifle away. He always uses a bore-guide and has all the proper jags, brushes and patches. The borescope quickly revealed the problem – a hard ring of copper and carbon had built-up immediately in front of the chamber. When you use a bore-guide (and you always should do) it can sometimes ‘protect’ this first bit of the bore from the cleaning-brush. Although the rest of the bore was spotless, this tiny section was not. Once we knew where the problem was, it was simple matter to carefully clean it up.

A borescope will tell you if your cleaning regime is effective, or inspect for throat-erosion and the general condition of the rifling. In addition, it’s very useful to the gunsmith for inspecting newly-cut chambers – making sure they are free from scoring and other machining defects and you can even have a good look at the muzzle-crown – one of the most important parts of any barrel. Tiny burrs can often be present on newly-cut crowns and even the minutest of damage to a crown (often caused by careless cleaning) can play havoc with accuracy. For the serious shooter, you could say that a borescope is the equivalent of a doctor’s stethoscope.

In addition, you can look into all-sorts of other small orifices – like cartridge-cases. Head separation for example can be dangerous – as well as ruining your shoot if the body of the case sticks in the chamber. You can even have a look inside your dies – maybe they are marking the cases, or what about the inside of your bolt – an often overlooked area which can be responsible for delayed lock-time and light-strikes.

The professional gunsmith will already have a Hawkeye borescope but this budget Lyman borescope is within the range of all serious shooters and will undoubtedly pay for itself in many ways.

If for example shooting classic military rifles is your bag, then the borescope can save you from buying a piece of junk. What looks like a bright, shiny bore when you hold it up to the light and peer down the barrel, is often an illusion. If you are going to buy a secondhand rifle and can’t test it on-range, a quick look with the borescope will tell you if there are any horror stories lurking in there and it could be a good way to get a price reduction!

Similarly, I’ve brought back to life a few seemingly ‘shot-out’ barrels just by giving them a damn good cleaning but again, don’t waste your time and money on a barrel that is truly goosed. Only the borescope can reveal the truth!

Of course, most of us aren’t used to looking inside rifle bores and yes, you need to get familiar with what a bore in good condition looks like. Way back when I bought my borescope I did this by looking down a selection of new barrels – both cut and button-rifled ‘match’ barrels and also a few ‘factory’ rifle bores. You soon begin to get a feel for it.

The mirror is angled at 45o so you get a very clear picture of the rifling in close-up. Rotate the probe as you advance up the bore so you can do a radial inspection. The Hawkeye probe is only 17 inches long but, the Lyman probe is 20 inches long so, if you go in from both ends, you can cover a 32 inch barrel with an action fitted. Yes, most of the problems tend to occur in the first six to nine inches of a barrel but it always pays to inspect the whole length.

Most shooters will be aware of the fouling which will build up in a bore from burnt powder residue and the bullet’s copper jacket. Powder-fouling is not too difficult to remove but copper can be another matter. If copper is not removed, it will tend to attract more copper until the build-up is sufficient to start distorting subsequent bullets. Usefully, the Lyman’s probe is marked in inches, allowing you to pin-point the exact location of the defect when you come to try and rectify it.

Copper-fouling is often most prevalent when running-in a new barrel and when I was running in the barrel of my latest creation, I was cleaning after every few shots then ‘scoping the bore to check my work. Copper build-up was moderate and I was managing to get most of it out quite easily using Sweets but there was one stubborn streak about three-inches down from the muzzle. It took me a good hour to get rid of it – eventually using JB paste – but at least I knew where to ‘work’ the bore. Without the use of a borescope, it would probably still be there and my barrel would never give its best.

In the years before I had a borescope, I was shooting a 6-284 – a noted barrel-burner. It was a great rifle and cartridge and gave me many wins. Then, with around 1000 rounds down the barrel, I began to have a problem. About one in every ten shots didn’t hit the target. This completely ruined several shoots before I finally realised that the ‘missing’ bullets were in fact ‘exploding’ en route to the target. Reason? When the barrel was eventually ‘scoped’ the first twelve inches or so were horrendously ‘fire-cracked’. The fire-cracking was so severe that it was tearing-up the bullet-jackets – so badly in some cases that they clearly weren’t holding together under the centrifugal-force generated when spinning at something like 300,000 rpm. Having my own borescope would have revealed this problem and saved me a wasted season.

Are you sold on borescopes? OK, but exactly what do you get for your hard-earned with the budget Lyman? Unlike the Hawkeye, which gets it’s light source from a small Mag-Light, the Lyman is mains operated. This is not a disadvantage – I don’t think I’ve ever used mine away from an electricity point. The 20 inch long probe will scope any barrel down to 20 cal. In addition, it comes with a viewing monitor – which has a button allowing you to capture a 320 x 240 res. photograph. The photographs are stored on a standard ‘camera’ SD card that you can plug into your PC for later study.

If electrical digital things don’t sit well with you – fear not, the Lyman is simplicity itself to set up. I had it working within a couple of minutes without the need to read the instructions.

Having said that, the instruction book is very easy to follow and explains the photo-capture facility etc.

Here’s a series of photos I took for the purposes of this article. This barrel came out of the scrap-bin but someone had actually been shooting this rifle before he finally gave up and came in for a new barrel. Shooting a barrel in this condition is really throwing good money down range! Buy a borescope and stop shooting long before your barrel gets into this state! 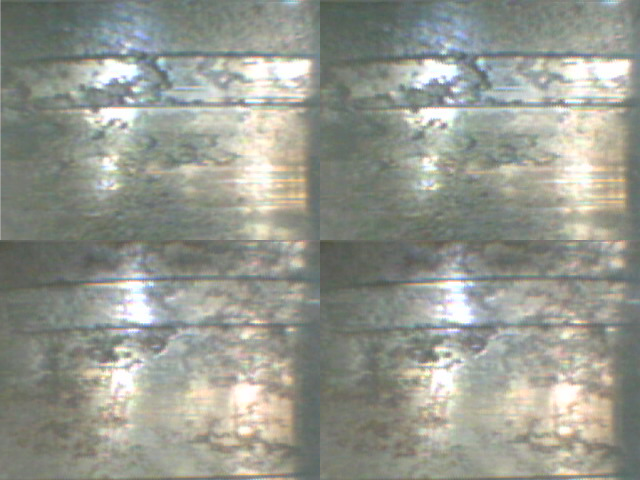 The monitor is quite sophisticated – allowing you to take a photograph with the ‘Capture’ button and the brightness can also be adjusted. When you’ve taken a series of photos you can review them and delete them as required. An SD card is supplied and a USB card-reader is included so you don’t need to have a card-slot on your computer.

To be honest, the photo-capture is a ‘nice to have’ feature – if say a gunsmith wants to e-mail them to his customer but it’s pretty obvious when a barrel is past its best – without taking a picture! However, we did have a rifle in the other day with a strange defect in the chamber which was marking the brass. It needed lathe work with a chamber reamer to clean-up the defect and so it was handy to be able to show ‘before and after’ pics to the customer.

Finally, this is a delicate, precision instrument so treat it with care. Be careful not to bend the probe when inserting it and always thoroughly clean any barrel before inspection – it’s important not to get dirt or cleaning fluid on the tiny mirror. (A cleaning kit is provided if you do!).

In my opinion, this product is one of the very best to come along in recent years and I predict that the demand for these borescopes will be very heavy and I would advise you to place an order as quickly as possible if you want one. Hannam’s Reloading are the UK Lyman importer www.hannamsreloading.com

Thanks to Osprey Rifles for the loan of the borescope and their assistance in compiling this article. Visit Osprey Rifles at www.ospreyrifles.com 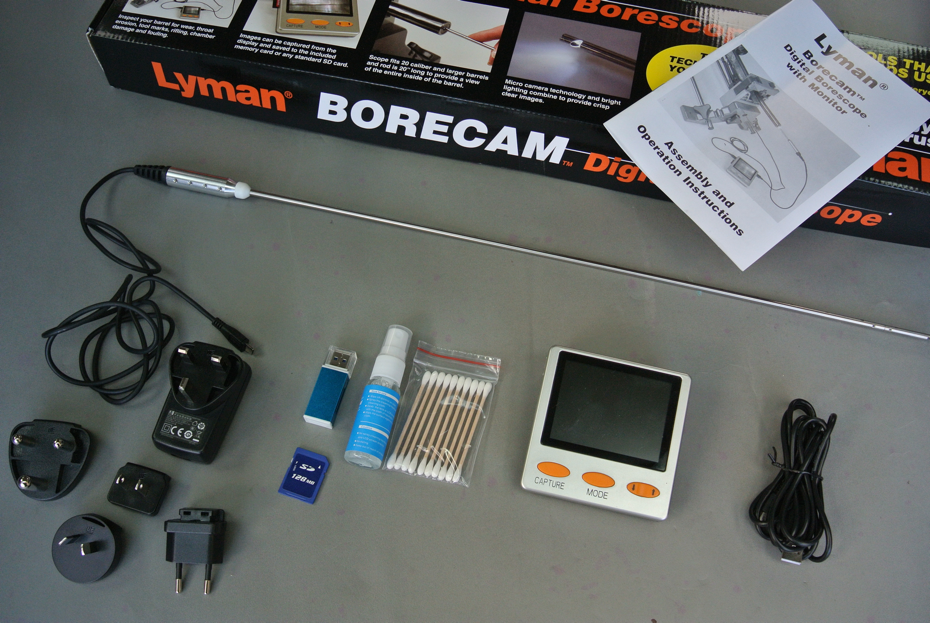 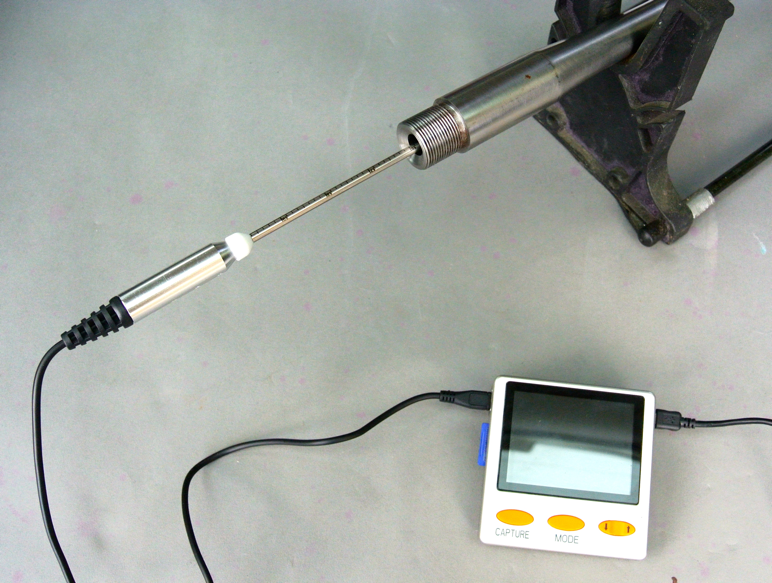 Set-up is very simple and, within a minute or so, you will be viewing the inside of your barrel. There’s no need to remove the barrel of course – this is just a scrapper I used for the photograph. Note the ‘inch’ graduations marked on the probe – very useful. 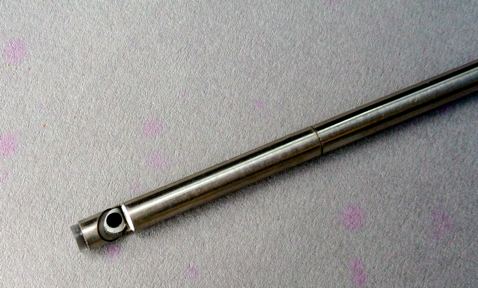 This is the important bit – the tiny angled mirror 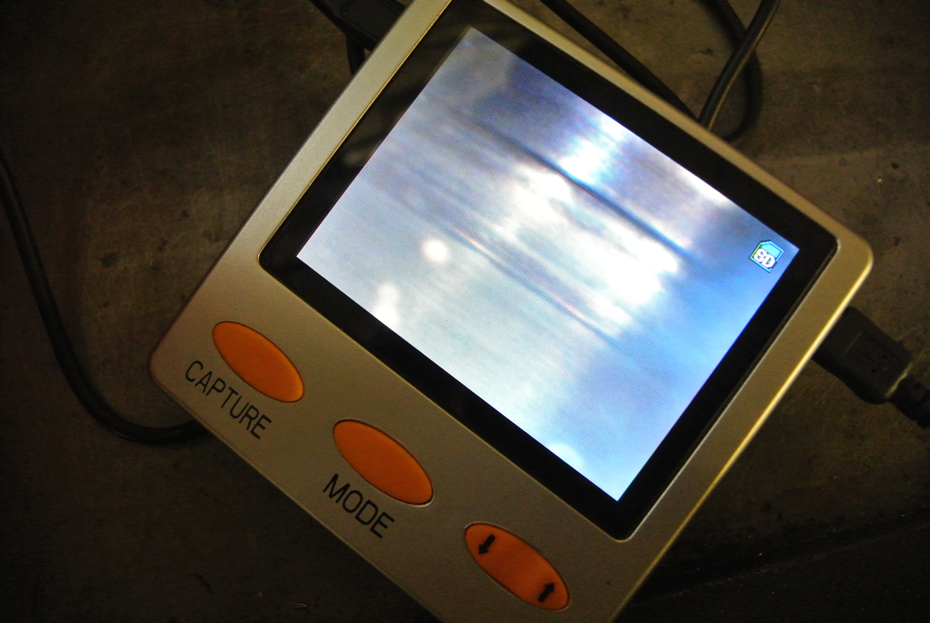 Here’s an actual screen shot of the monitor – in reality, it looks better. This is what a good barrel looks like by the way

Here’s my Hawkeye for comparison. The Hawkeye probe is only 17 inches compared to the Lyman’s 20 inches