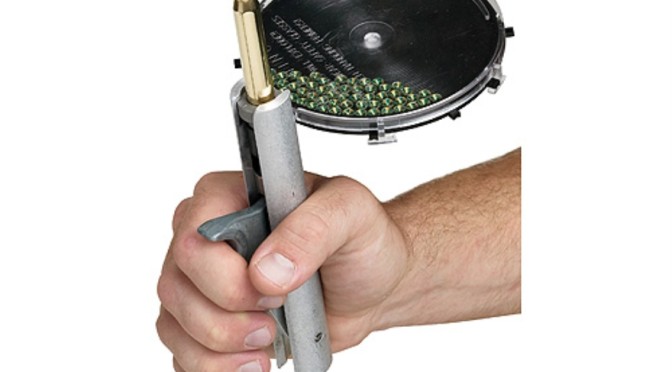 Our hand-loading guru Laurie Holland is currently running an extensive series of tests on primers and their affect on accuracy. Many shooters, looking for that last degree of accuracy from their ammunition, are discovering that a change of primer can sometimes be beneficial. It’s a while since anyone has done a primer test this thorough and the results may surprise you, so keep a look out for Laurie’s article in Target Shooter in the coming weeks.

In this article, as a prelude to Laurie’s treatise, I’m having a brief look at the tools designed to insert the primer in the case and, right at the outset, I’ll confess that the article was inspired by my use of a priming tool I’d not handled before – even though it’s the product of a major manufacturer.

Of course, many of you will use the priming attachment that came with your press and why not? In the past, handloading experts have condemned these as having too little ‘feel’ due to the enormous leverage available with a press designed to re-size cases and, unless you are careful and develop that ‘feel’, it is easy to apply too much seating force and crush the primer.

We’re not talking about crushing the primer to the extent where it ignites God forbid but, more a case of ‘over-seating’ the primer. We simply want the primer to just ‘bottom’ in its pocket – no more no less – and importantly, we want the same ‘feel’ each and every time, if we are to ensure consistent ignition. When properly seated, the primer should be ever so slightly below the case-head. You may not see it but you can feel it by running a finger over the primer.

Now, I’m not aware that anyone has ever done any comparisons with lightly-seated against heavy-seated primers – how about it Laurie – but, as always the word is ‘consistency’ if we want the same consistency from our results on the target and, for this reason, experienced handloaders will opt to use a hand priming-tool.

Back in the day, I guess most of us used the Lee Autoprime. It was a great tool at a very modest price. It allowed a fair degree of ‘feel’ but, on the downside, the components were die-cast from poor metals and wear in the linkage soon occurred – with the result that primers were eventually protruding slightly………not good! If you don’t seat your primer fully, the firing-pin will do it for you! Fortunately, spares were cheap and, once we knew its limitations, the Autoprime served us well. RCBS offered a similar tool but I always preferred the Lee – the RCBS seemed too fiddly when changing shell-holders and the like.

Then, some – well I’ll refrain from name-calling – person claimed to have ignited the whole tray of primers when using his Autoprime and of course, once this had been circulated on the internet, the Autoprime’s days were numbered……….. What’s more, the Autoprime wouldn’t take a no.5 shell-holder, which meant that it couldn’t be used with WSM (Winchester Short Magnum) brass, which was growing in popularity and forcing shooters to ditch their Autoprimes anyway.

Lee quickly responded with a new version – the XR – to address the ‘ignition problem’ with a fiddly ‘lift’ system to isolate the primer being seated from the rest of the tray but the replacement was never as good as the original Autoprime. A few lady hand-loaders just couldn’t apply enough force to seat a large primer with the XR. Mine was soon confined to the scrap-bin and, as I was also loading for the WSM, I managed with one of Lee’s other offerings – the rather splendid Lee Ram Prime tool. This is a great little tool and cheap as chips but it meant ‘one at a time’ priming – much slower than the hand-held primer-tools and again, relying on operator ‘feel’ as it’s used with a reloading press.

If nothing else, Lee are quick to respond to their customers and their answer to the XR was the Ergo Prime (the red one) but, by now I was done with Lee hand-priming-tools, save for the excellent but expensive Sinclair one I use for benchrest. Then, I discovered the Hornady priming tool. I came upon this one quite by chance – when we were running a reloading school using equipment kindly donated by Hornady UK importers Edgar Brothers.

The Hornady works on a similar principal to the Lee and RCBS but, unlike the Lee, it utilises the same cartridge-dedicated shell-holder you use with your press and, of course, offers large and small ‘seating plungers’ depending on which primer you are working with. As with the Lee, primers are tipped into an attached plastic tray, complete with transparent lid to prevent spillage. What makes the Hornady design better is that it offers plenty of leverage – with feel – so that even our lady shooters (no sexism intended) will seat primers with ease.

As with the Lee Autoprime, two trays are included – not for different size primers but to suit different shell-holders – the RCBS shell-holders are slightly different to the Hornady-made ones, so if you have RCBS style shell-holders (as I do) you will use the green tray. Each tray is ‘double-ended’ to cater for the large and small primer seating-plungers.

Swapping shell-holders is just a matter of depressing the tray, removing the shell-holder and slipping in another. If you need to swap from large to small primers, just remove the tray, turn it around and pop in the small primer-plunger. If you’ve used an Autoprime you won’t need to read the instructions to do this (but please do!) and, as with the old Autoprime, it takes only a minute or so. Both these tasks can of course be accomplished without resorting to any tools

The main ‘body’ of our priming tool is made from aluminium but Hornady have sensibly made the parts which take most of the load – and are thus likely to wear – from steel and should therefore give a long life. Incidentally, there were a few tiny machining burrs on the aluminium which were easily removed with a Stanley knife and allowed the close-fitting plastic trays to slip in and out without snagging.

Well, I’m sorry in some respects to see the end of the old Lee Autoprime but at least we have a viable replacement from Hornady and yes – WSM loaders, it will take your no.5 RCBS shell-holder! As a sop to the Lee internet incident perhaps, the trays carry a warning ‘Primers will explode – always wear safety glasses when handling primers’. You can’t be too careful.

Edgar Bros are the Hornady importer but see your local dealer as Edgars are trade only. The recommended retail price is just £ 49.