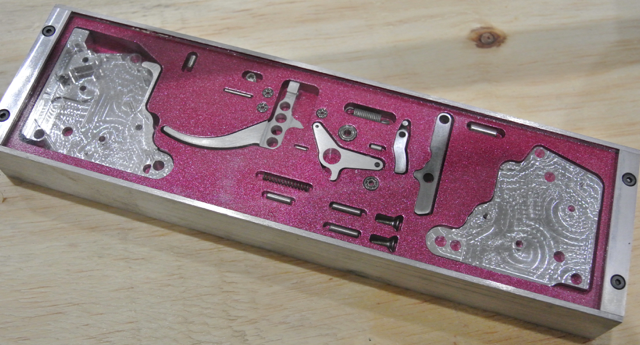 Not too long ago – well OK, maybe 25 years ago – the choice of replacement rifle triggers was rather limited – in fact, if your rifle didn’t use a Remington-style trigger, there was usually no option of a replacement!  Factory rifle triggers were – from a competition standpoint – horrendous and re-working of the Remington trigger was the realistic (if ill-advised) tune-up to obtaining a half-decent trigger.

However, Arnold Jewell’s famous trigger is a legend amongst precision trigger-pullers and, in spite of the cost, was often the ‘go to’ option.  It became a useful upgrade to a Remington custom build and a ‘must’ for any competition rifle using a Remmy-style trigger.  The Timney and the Rifle Basix triggers have long offered a more reasonably-priced upgrade and offer replacements for most popular rifles.  They generally work well on anything outside of a competition benchgun, offering a lighter trigger with crisp let-offs and reliable ‘pull’ adjustment.

When F Class came along, shooters and gunsmiths soon latched on to benchrest trends and the Jewell again became the ‘go to’ option for many serious ‘effers.  After all, there is little difference between the accuracy requirements of F Class and long-range benchrest.  However, like any precision instrument, triggers like the Jewell must be treated with respect – benchrest is shot in controlled conditions, under cover – unlike F Class where rifles are subjected to inclement weather, debris and dust.

Nonetheless, the Jewell had few rivals. Yes, we’ve had the Kelbly trigger for a good few years – designed specifically for benchrest use and indeed the Shilen trigger – though rarely seen on this side of the pond.  If this were an article on triggers in general, I would also mention the latest trigger from the USA – the Triggertech – which, whilst not claiming to be an out and out benchrest trigger, is quickly gaining a reputation due to its quality, price and range of applications.

A couple of years ago, the dominance of the Jewell and other American triggers was challenged by a rival – from Europe – the Bix n Andy trigger from Austria.  This was a revolutionary design utilising ball-bearings.  I first encountered Bix n Andy a good few years ago at the World Benchrest Championships in their native Austria.  They had some interesting new ideas, though at that time, their trigger was still a dream………..

Benchrest shooters just can’t shoot those ‘one hole’ groups without a very light (1 to 2 ounce) crisp trigger and serious benchrest shooters are quick to seize any opportunity which may give an advantage, no matter how small.  Benchrest is massive in the USA and the Americans were soon raving about the Bix n Andy trigger.  After a chat with some of the world’s top BR shooters at the 2015 World Benchrest Championships in St Louis (at which Andy, of Bix n Andy, was shooting) I ordered a trigger for my own benchgun.

Now I’m certainly no expert on triggers – I’m simply a benchrest shooter and I’ve relied on Jewell and Kelbly for a couple of decades, pretty well without problem.  In fact, my very first Jewell trigger, supplied and fitted by Callum Ferguson of Precision Rifle Services in Scotland to my first 6PPC benchgun, is still going strong 25 years later. It has never been adjusted or (I’m ashamed to admit) cleaned! If it ain’t broke………..

I first met Fabio Fare a couple of years ago at the German IWA shooting show. I was a little surprised to see a 6PPC benchrest rifle one of the Italian stands and got talking to young Fabio. He was a committed benchrest shooter and he had designed his own trigger. He had a dismantled trigger to show me – yes, it also utilises ball-bearings but not in the way the Bix n Andy does.  Look at the photograph – I was knocked out by those tiny ballraces used in the build.

Good as the Remington design is, the weakness is the side-plate design – which can distort slightly and impose stress on the trigger’s moving parts, playing havoc with that feather-light let-off.  You will notice that many of the replacement triggers do not therefore employ the side-plate method but CNC machine the body from one piece of metal.

Before the IWA Show, I had never seen or heard of Fabio Fare but another connection was made when I found out that he was supplying triggers for the (then) new range of competition rifles from Victrix.  I later got to shoot a few of the Victrix rifles and experience the Fare trigger – indeed we reviewed one or two for Target Shooter thanks to March Scopes Uk.

How things have changed in the last decade.  Yes, the American ITAR regulations continue to control the export of firearms-related items but generally it’s not too difficult to pick up a decent replacement trigger.  And don’t think that these triggers are the preserve of serious benchrest shooters – almost any rifle will benefit from a trigger with a clean, predictable let-off.

A final WARNING – not all aftermarket triggers will necessarily fit and function in your rifle – even though it has a Remington style trigger. Also, extremely light triggers can be prone to slam-fires IF NOT PROPERLY INSTALLED AND ADJUSTED.

Yes, the Remington style trigger is fixed by just two pins – easy enough to install but, easy enough to get it wrong!  Also, many actions utilising aftermarket triggers use a trigger-shoe. The correct trigger-shoe is vital to the safe functioning of the trigger.  Never assume that you can simply remove (for example) your Jewell trigger and slot in a Bix n Andy trigger and expect it to work properly and safely!

The installation of aftermarket triggers is best left to the professional gunsmith, who will not only recommend the best trigger for your rifle but install it correctly for a safe reliable performance.