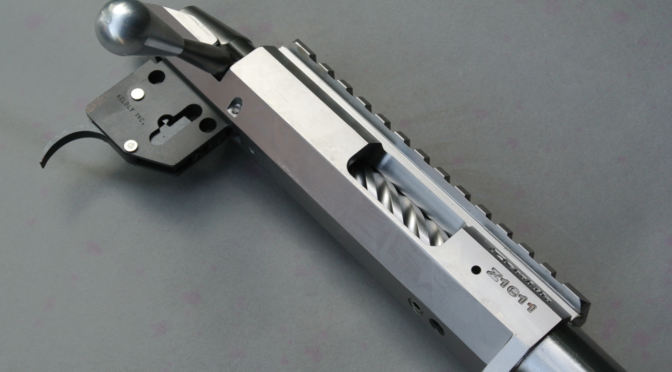 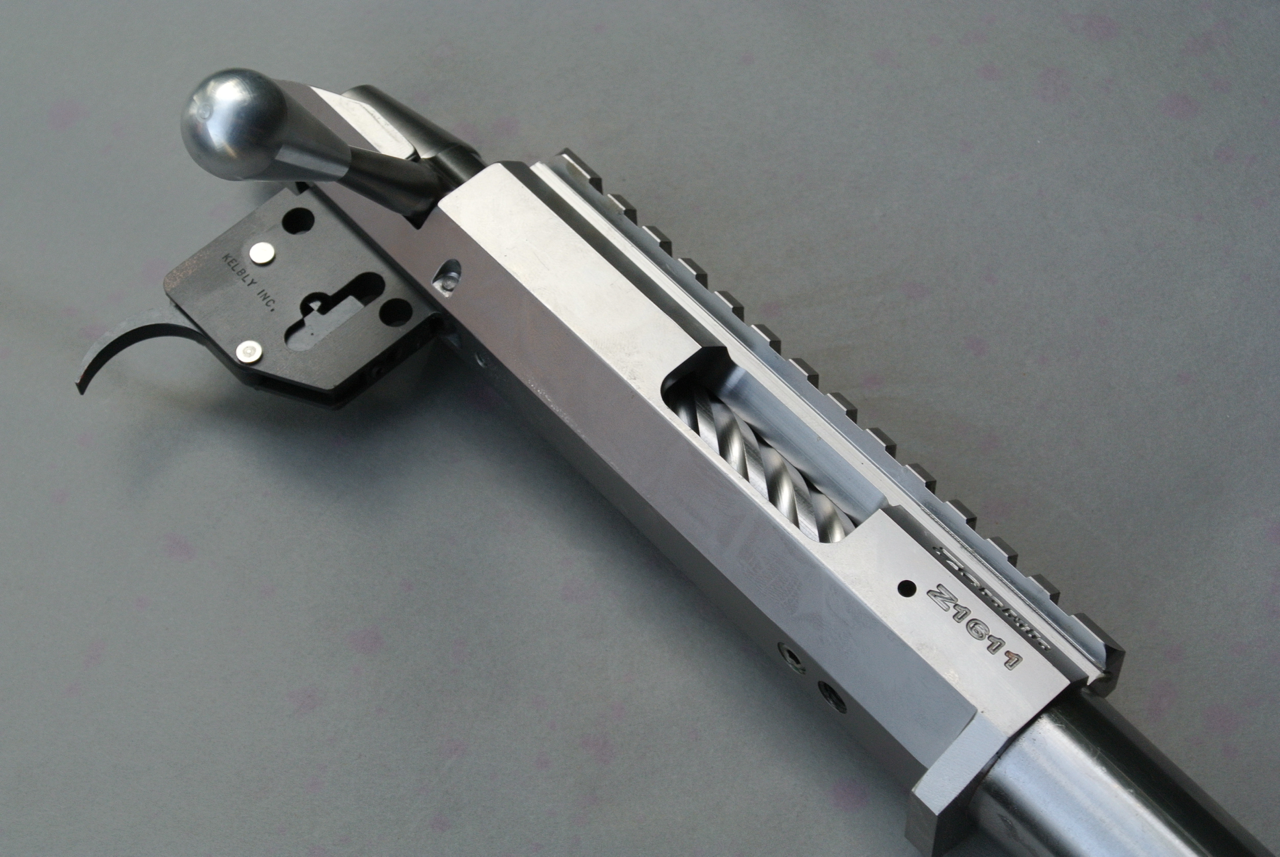 The name Apex may not immediately ring any bells so let’s try John Carr and Resolution Precision. Yes, many of you will have seen and even shot John’s actions – probably without even knowing it, for John has made his own actions for many years for various gunsmiths who’ve had them branded with their own name. I won’t embarrass anyone by naming them for that’s the way John was happy to conduct his business and if everyone is happy – no problem. Check out our visit to John’s facility a couple of years ago. http://www.targetshooter.co.uk/?paged=16&cat=54

Previously, most of John’s actions have been Remmy clones – a sensible option as many stocks, triggers and accessories are available for the Remington 700 action but, John’s latest Zenith action is of his own design and incorporates many desirable features that you won’t see on any Remmy. Now, John has wisely re-branded as Apex UK Precision https://www.apexuk-precision.co.uk/ and, from now on, John is engraving his actions with his own ‘Apex’ brand name. 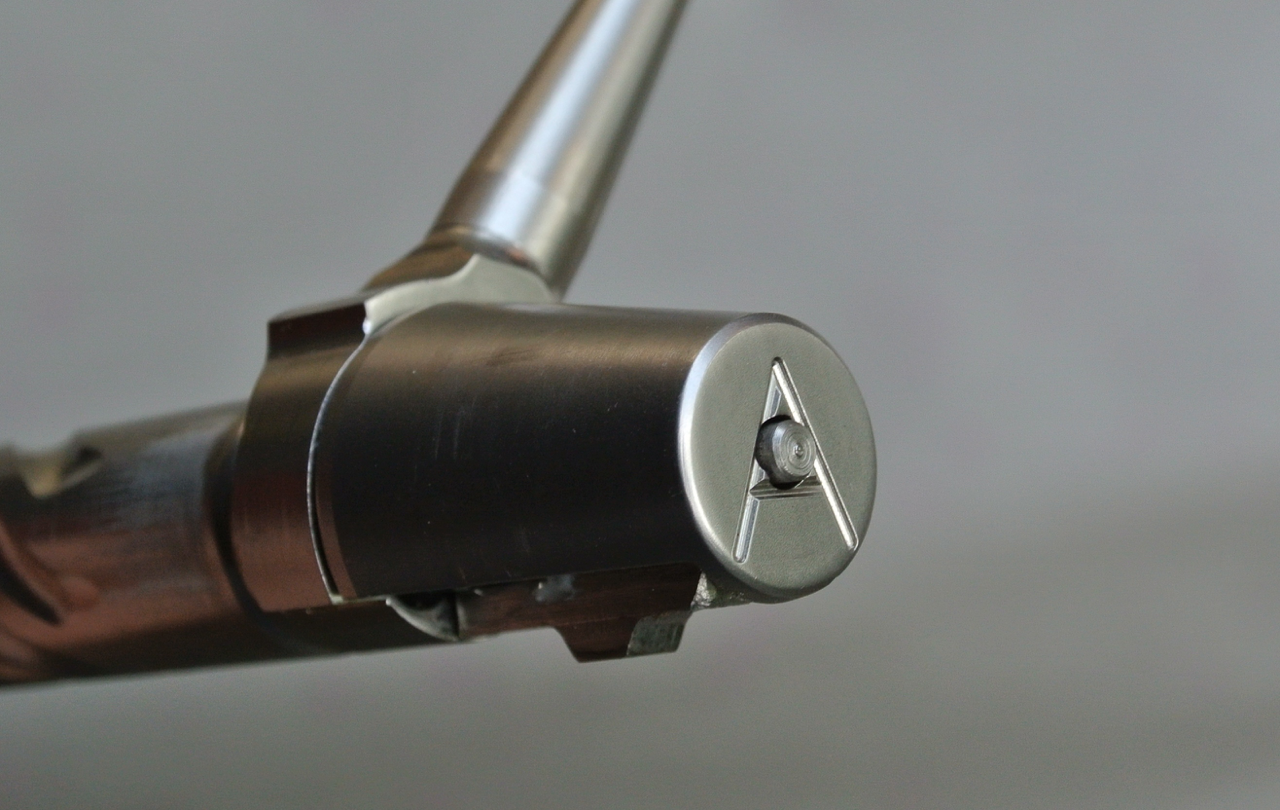 John’s A for Apex on the bolt-shroud

So, we’re all familiar with the Remington 700 action – a classic two-lug turn-bolt design that has served both the hunter and the target shooter for decades. It has inspired many copies but, things progress and shooters are now demanding addition features from their action – especially when specifying a custom build. 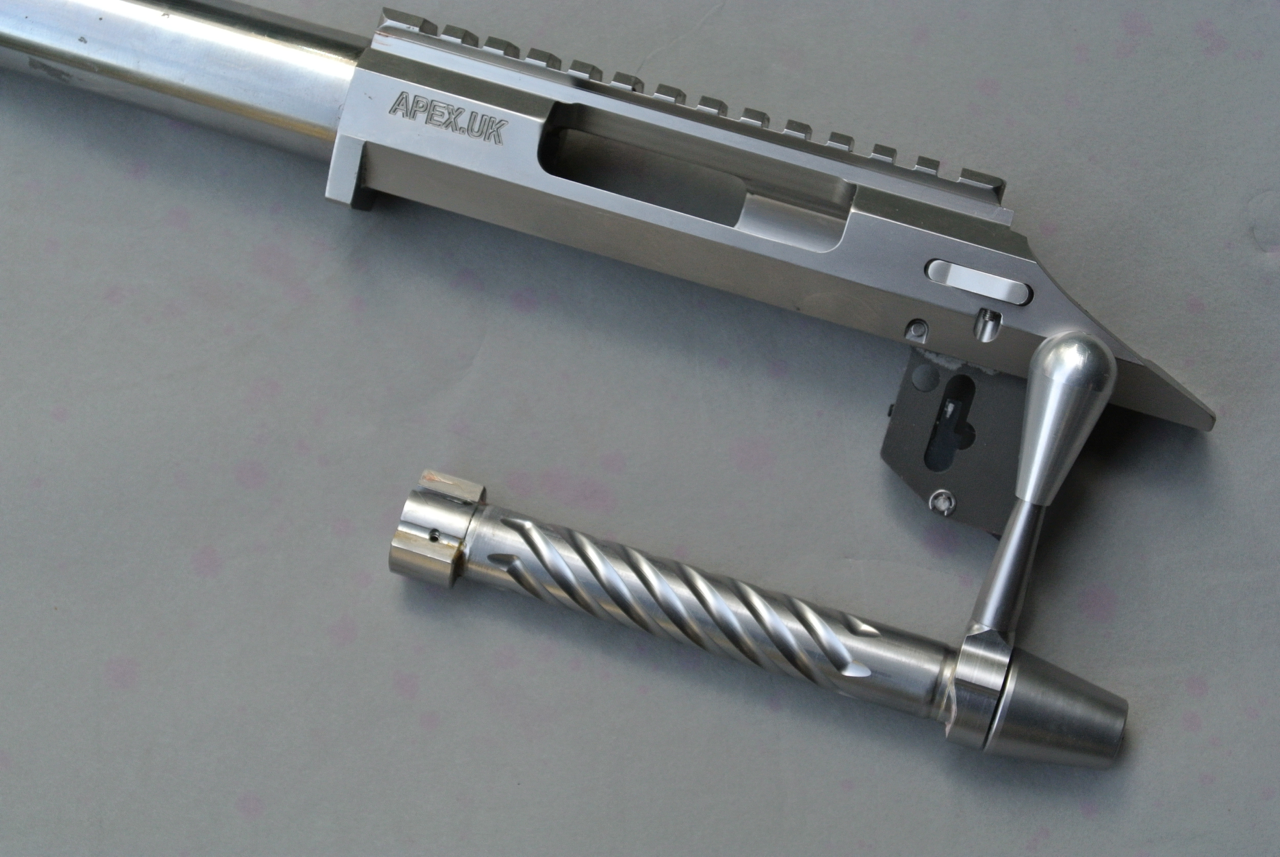 It goes without saying that the CNC machined Apex has a far superior ‘fit and finish’ to any Remington, plus a built-in recoil-lug (handy for a switch-barrel rifle) built-in Pic rail (with 20MOA taper if required), larger tenon for maximum barrel-support and, in my case, a micro-port.

Micro-port? If you’re not familiar with this feature, the micro-port is usually specified by benchrest shooters who need to run a single-shot bolt-action very fast – we’re talking 5 aimed shots in 12 – 15 seconds. The bolt-handle is on the right as normal (for a right-handed shooter) but the feed-port is on the left. This right-bolt/left-port configuration is now the ‘norm’ with most custom F Class and benchrest builds and it makes a lot of sense – if you have a feeding/extraction issue in the middle of a match (and who hasn’t?), then it makes sense to have the feed/ejection-port where you can see – and more easily sort – the problem.

But, when benchresters are really ‘running the gun’ and the brass is flying, it’s all too easy to try and chamber a live round before the spent case has ejected – resulting in, well you can imagine – I’ve seen it happen many times! By the time you ferret-out the spent case and chamber the next round, the wind has changed and your tiny group is toast! 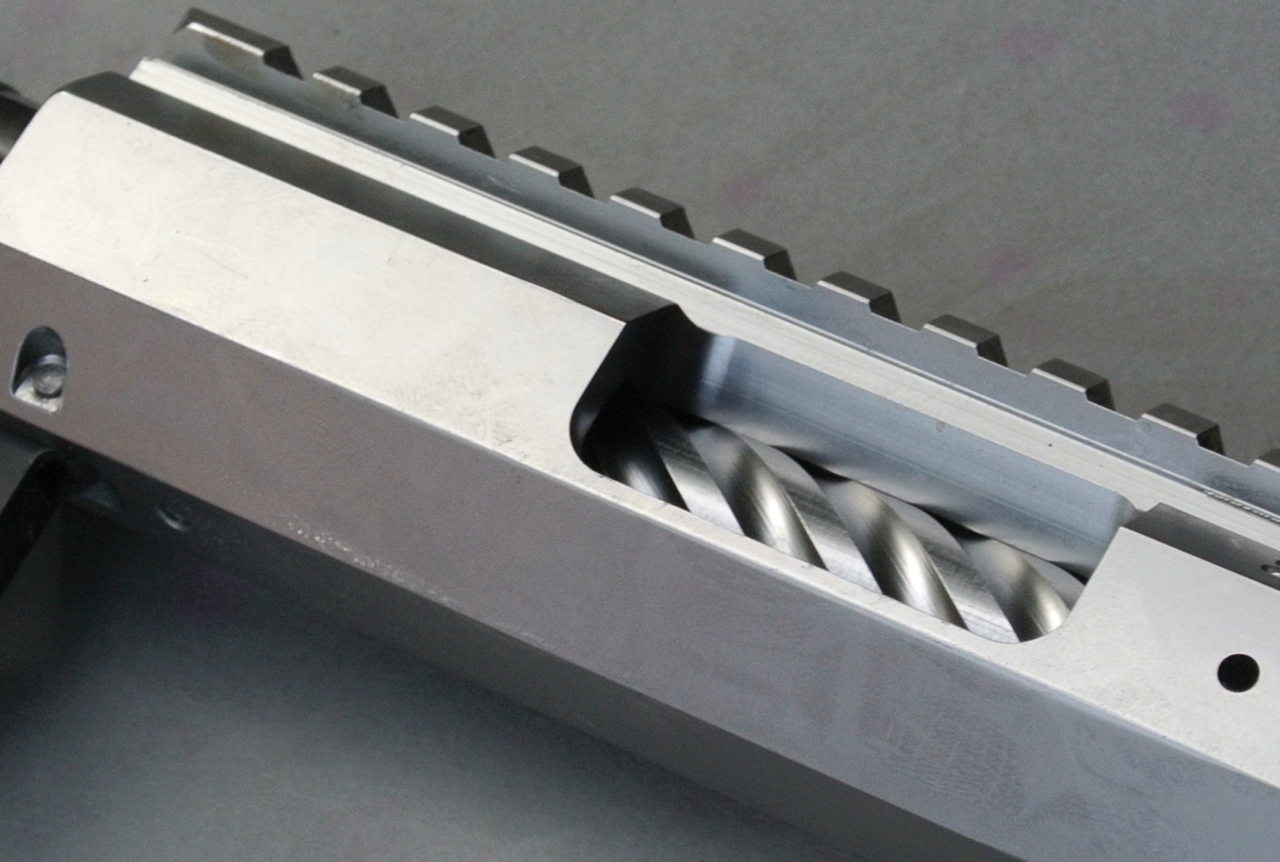 So, the micro-port is an additional small port on the right-hand side of the action and the spent case is ejected via the micro-port – as the live round is inserted from the left and the two never meet! The micro-port is much smaller than a conventional port – so as not to compromise action rigidity – as it only has to eject a spent case. It will not eject a loaded round. My port is designed to eject a BR size case – if you were using a Creedmoor it would need to be a little longer.

The stainless-steel Apex action comes with a vapour-blast finish, which imparts a practical and attractive satin-like sheen – which doesn’t pick up stains and blemishes like a matt or polished finish. Dimensionally, the action is the ‘standard’ eight-inches in length and, although not a ‘drop-in’ replacement for a Remmy, it should be possible to install it in any Remmy-size stock with maybe a little machining and bedding and it will accept any Remington-style trigger – such as Timney, Jewel, Kelbly, Bix n Andy etc. 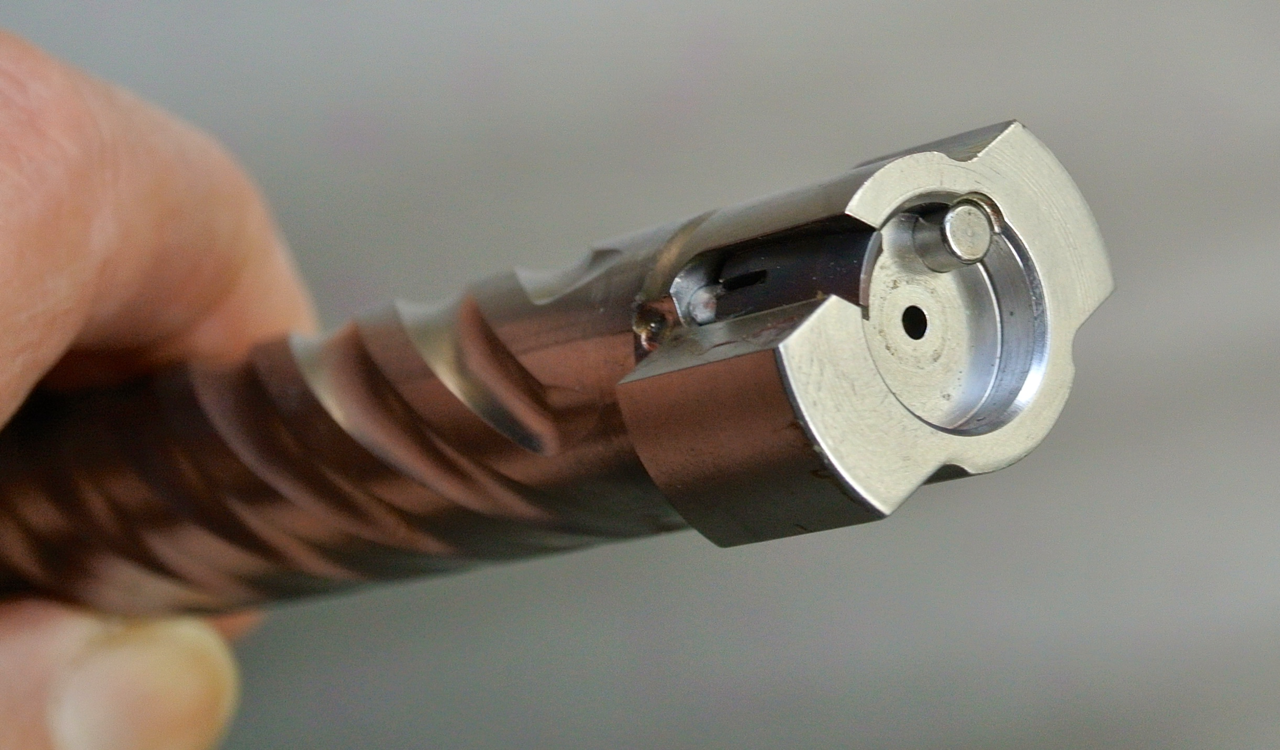 The two-lug bolt has a Sako-style claw extractor with bolt-face spring-loaded ejector. My bolt has a deep ‘barley-sugar’ twist but this is optional and other flutings are available. Remember, the fluting isn’t for show – with a custom action displaying minimal clearance between bolt and body, the slightest ingress of detritus could lock-up your action. The flutes give the debris somewhere to go and reduce the likelihood of a lock-up. Have I ever experienced a lock-up? Yes, in the 1999 World Benchrest Championships in Italy – the culprit was a bristle off a bronze bore-cleaning brush, which locked the close-fitting Stolle action solid and seriously ruined my Championship – not good!

Although my Apex action is solid-bottom, left-port, right-bolt with micro-port, you could equally spec a right/right with magazine cut-out for your ultimate tactical build. Either way, the Apex is a very capable action, arriving at just the right time when the dollar/pound exchange rate is making actions such as BAT and other American custom actions prohibitively expensive.

It makes sense to check out the Apex for your next custom build.