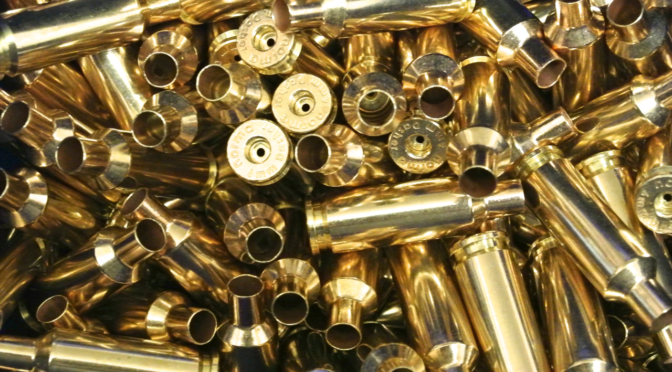 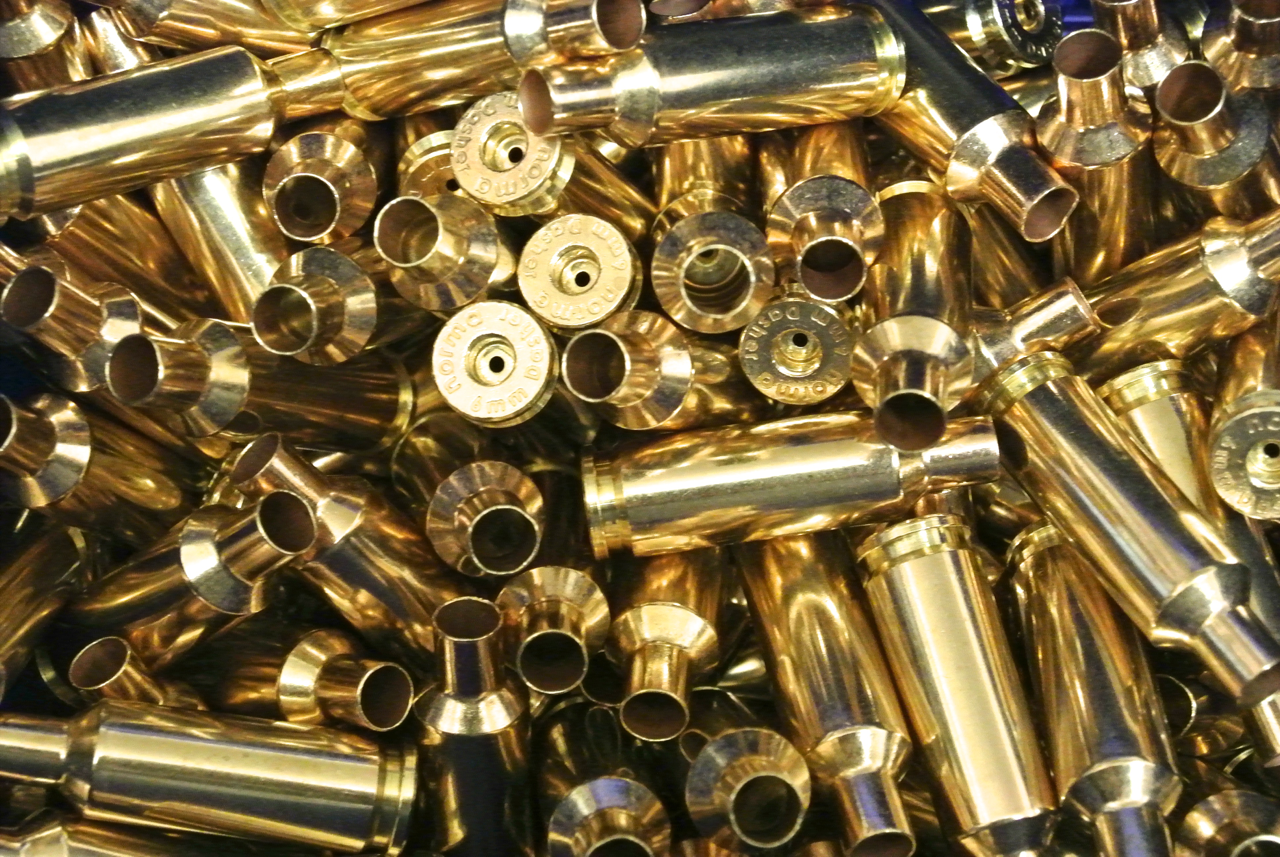 “Oh no – not another wildcat!” I hear you rant. OK, I know, wildcats are one of those creatures you either love or hate.

Regular readers of Target Shooter will know that I am a ‘cat lover through and through and the Dasher is certainly one of the most successful wildcats ever. Need convincing? Take a look at the stats for the 1000 yard World Benchrest Championships – you’ll find every cartridge from the basic 6BR through to the 300WSM and bigger but the Dasher is still the most popular Light Gun cartridge and still holds a World 10-shot Heavy Gun record.

Wildcat?
But, of course, the Dasher isn’t a wildcat anymore! The Dasher is now domesticated – thanks to American F Class shooter Shiraz Balolia, who has commissioned Norma to manufacture fully-formed Dasher brass (and 284 as well – ‘effers have no need to neck-up the 6.5-284 Lapua now).

If you’ve never had a rifle chambered for Dan Dowling’s fabulous little 6BR wildcat, then I can see how you aren’t getting the least bit excited by this news. But, if you’ve laboured long and hard to convert a 6mmBR case into a Dasher case then read on……

Let’s just remind ourselves in just what was involved in that wildcat case ‘conversion’.

Step 1 – Neck-up the 6mmBR case to 6.5mm. (Lapua is the preferred brass).
Step 2 – Neck-down just part of the neck – to 6mm (to hold the primer firmly against the
boltface in your longer Dasher chamber).
Step 3 – Neck-turn the 6mm portion of the neck. (assuming you are running a tight-neck –
which most Dasher shooters will do).
Step 4 – Load your cases, drive to the range and fire ‘em.
Step 5 – Check that your neck-turning coincides with the newly fire-formed shoulder – adjust
as necessary and load again.
Step 6 – Drive to the range and fire ‘em again.
Step 7 – Trim to length – your brass is now match-ready (though some shooters will fire a
third time).

So, why would anyone spend so much time, effort and money on this wildcat? All we get is a 10% increase in case capacity and a steeper 40 degree shoulder but the downside is, we lose a third of the BR’s super-long neck.

Not only is the Dasher a popular Heavy Gun cartridge but consider also that in last year’s 1000 yard World Benchrest Championships, over half the Light Gun field also used the 6mm Dasher.

Can it really be that good? As an F Class cartridge – no! At extreme ranges the wind will kill your light 6mm bullets – even if they are travelling at well over 3000fps. But in benchrest, where five shots are rattled off in a little over 10 seconds, the Dasher is a serious contender and this will be the purpose for my Dasher.

Fireforming – a thing of the past! 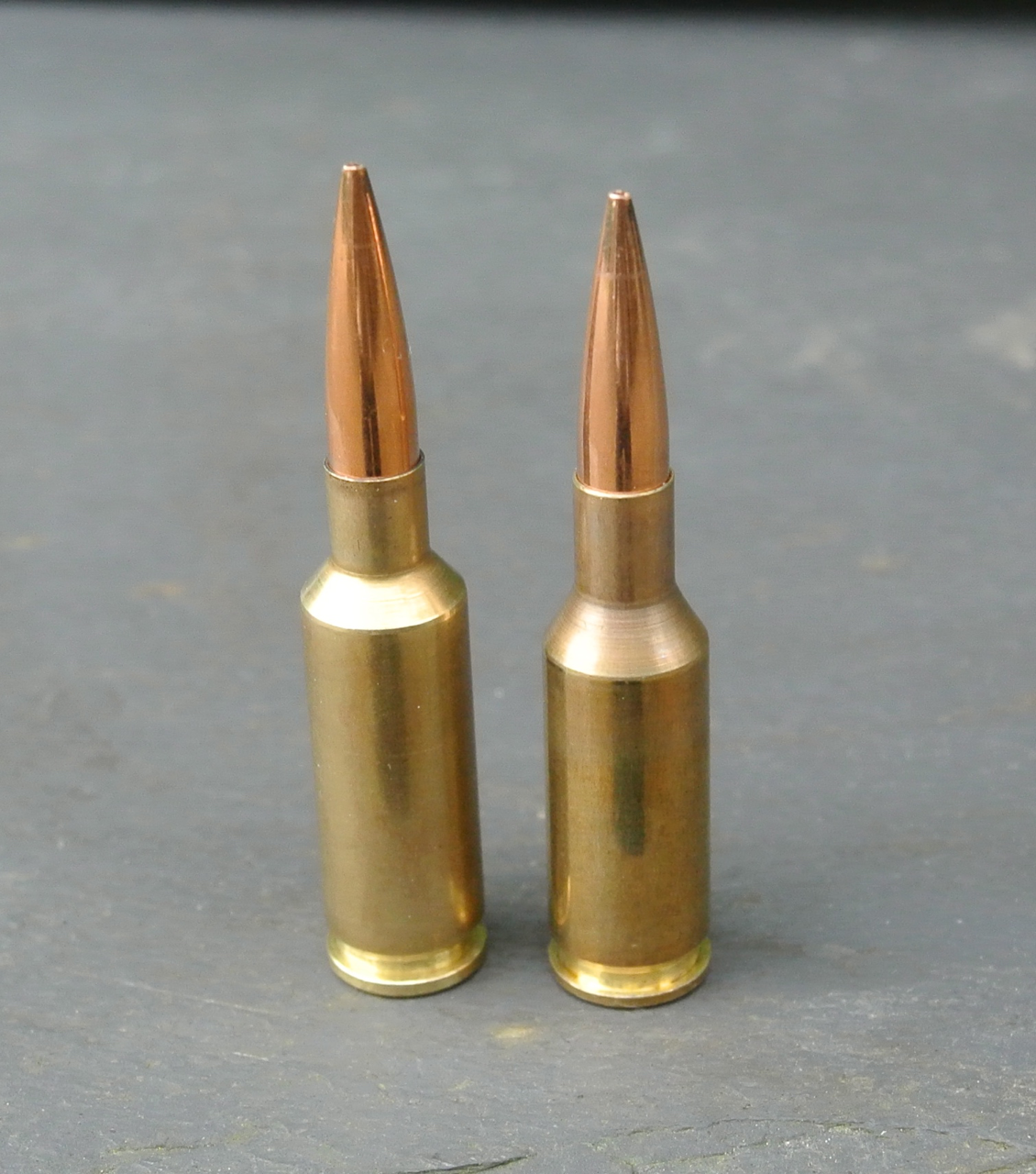 So how is the new Norma brass? Well, on one hand it’s fantastic – take it out of the box, load and shoot – what could be simpler? Also, whereas the old Dasher – formed from the 6mmBR case – lost that fabulous long neck – which undoubtedly contributes to the 6BR’s outstanding accuracy – the new Norma Dasher has an almost BR-length neck. A wildcatter’s dream! 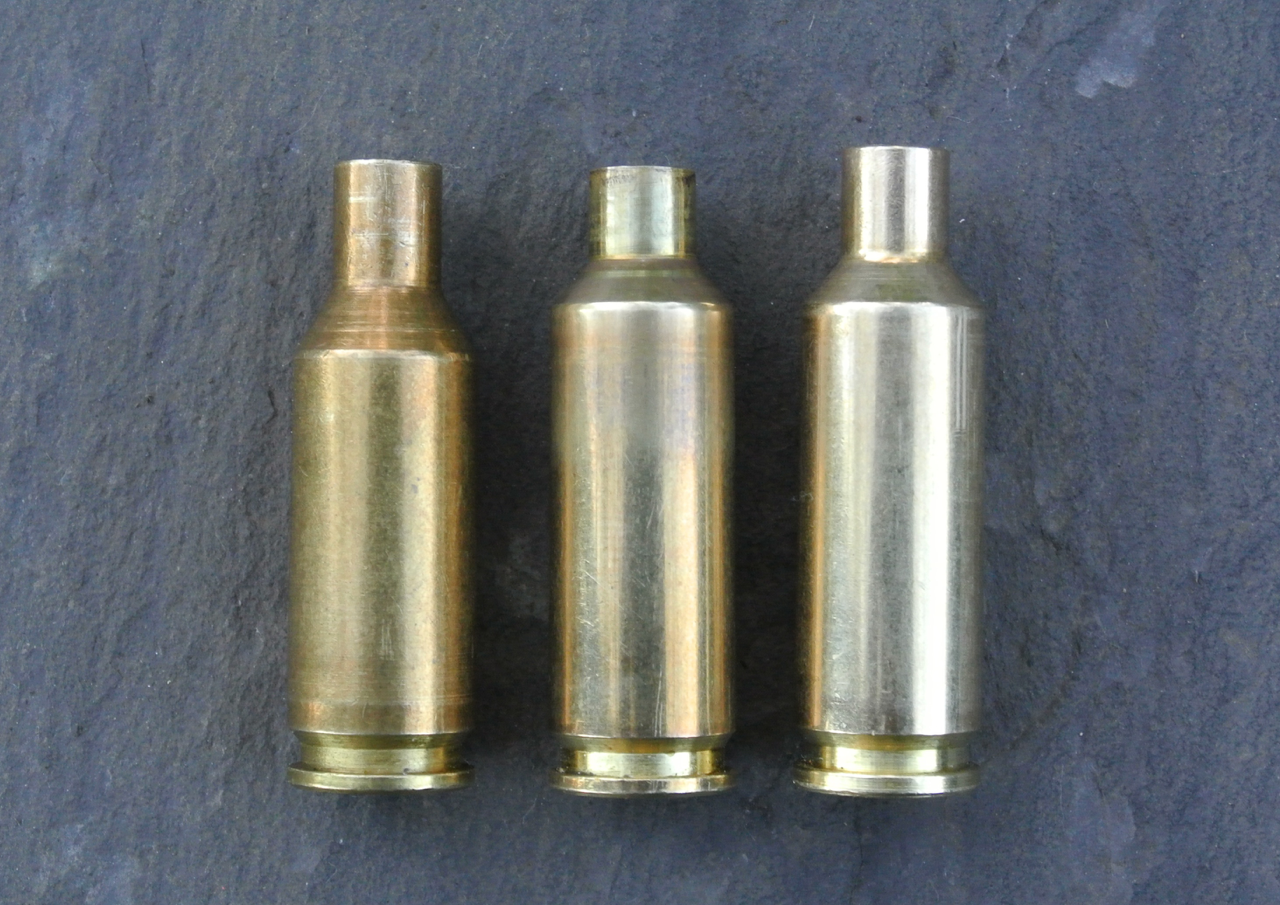 The only downside I can see is the case-rim – which differs slightly from a Lapua 6BR rim. On some rifles, this has allegedly created extraction issues but, on the two rifles I have personal experience of – a BAT and a Stiller Viper – extraction is just fine.

So, having chambered a barrel for my 1000 yard benchgun, let’s see if we can get it to shoot.

WARNING: The loads used were safe in my rifle but may not be safe in yours. Consult appropriate reloading manuals prior to developing your own handloads. Target Shooter magazine and its authors, do not assume any responsibility for the safety of readers attempting to replicate any of the loads shown or suggested. Every rifle is different, be safe, work up your load in small increments and be aware of pressure signs.

Load Development
This is not my first Dasher but it is the first with the new Norma brass and hopefully the final load should be similar. However, my preferred powder last time was Elcho 17 (now replaced by Swiss RS60) – a great powder but not too kind on barrels – so now I’m trying Vihtavuori N150 – a noted performer in the 6BR – which will push a 105gn bullet at over 2900fps with a case-full (about 32gn). Now, our Norma Dasher has around 10% more capacity than the 6BR so we are looking to comfortably exceed 3000fps with no loss of accuracy. 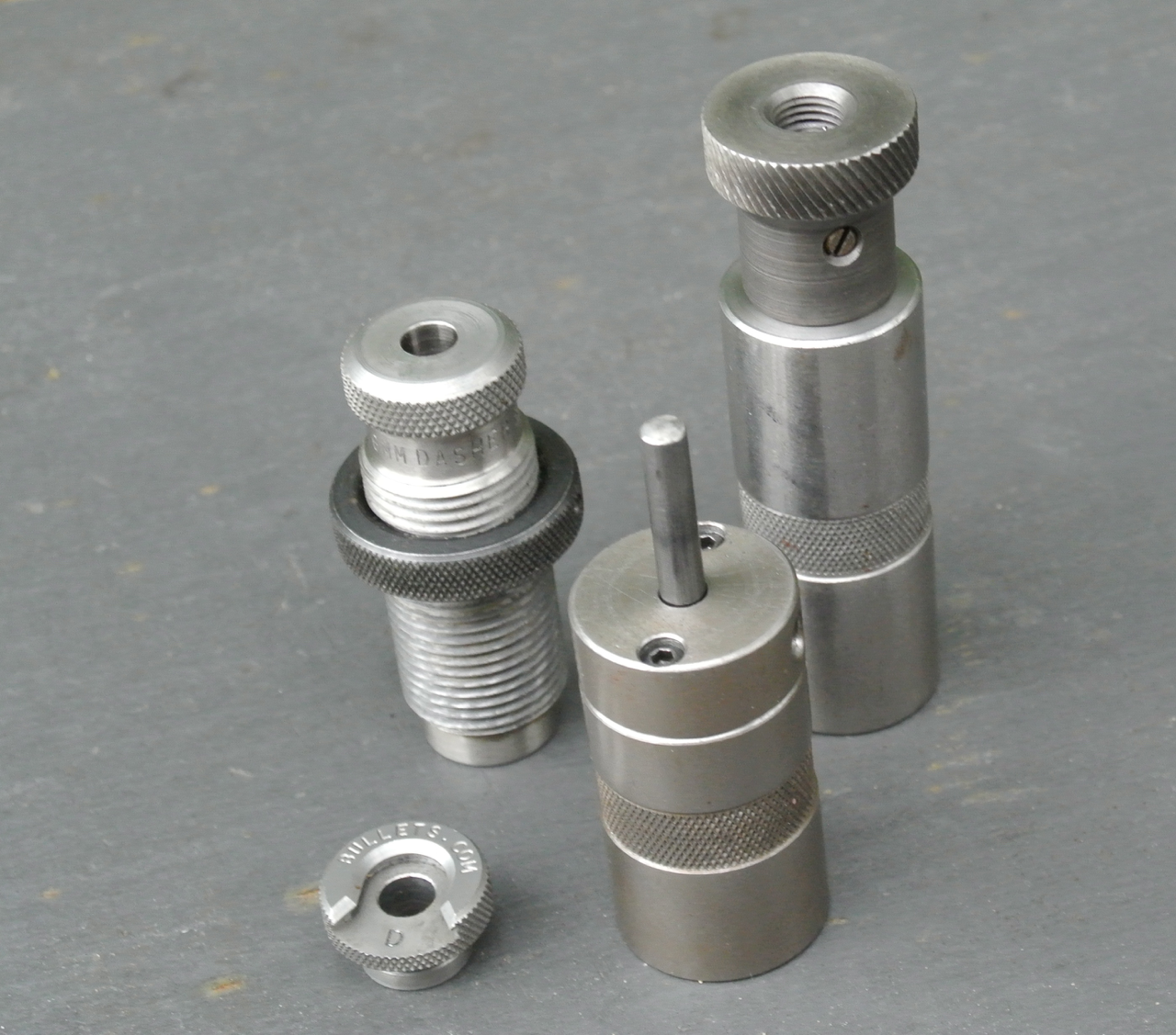 All my reloading is done with a Redding body-die, Wilson neck and seater dies plus that essential shell-holder

Unfortunately, my testing was a little disappointing. To check capacity, I filled a case with Vit 150 to the bottom of the neck – about 35gns and the first step was to see what pressures the case/rifle will stand – without stressing the brass. At £1.50 per case we need to get a few firings………

I tried about six loads, going from 33 to 35 gn in half-grain increments. Velocity was promising at the 35gn end but bolt-lift was noticeably stiff – meaning that the brass was flowing back into the bolt-face ejector-pin hole – not good for brass-life. Sure enough, on reloading, primer pockets were slack. These cases are now scrap.

When I tried a few 5 shot groups, the group size didn’t vary a lot whatever the load but accuracy wasn’t stunning – OK, comfortably under a half MOA but, that ain’t near good enough for 1000 yard benchrest competition.

I didn’t want to do it but it looks like I’ll have to resort to Elcho17 (or RS60 as it is now packaged by Swiss Powders).

The difference was startling! This is a great powder – velocity creeping into the ‘magic’ 3000fps, easy bolt-lift and accuracy is better – but still not stunning – my best group being a 0.291 in. OK, it was a blustery day but I really expected better. Time to play with seating-depth maybe – but no time, as my first 1000 yard benchrest comp. comes up within a few days – so we’ll rely on experience and settle for a 20 thou. jump with the Berger 105gn VLDs.

Competition Day
My Light Gun relay had no less than five Dasher shooters. Best group from the five of us was Chris Maunder’s – a superb 4.736 inches. Jeanette Whitney had a 6 and my best was a reasonable seven. My four-group agg. was good enough to take second place just a few thou. behind Chris. A reasonable start but hopefully more to come.

I’m convinced that I’m not too far away with my load but sometimes a different bullet can just make that difference. I’d brought a few hundred 105gn custom 6mm bullets back from a visit to the World Benchrest Championships in St Louis USA a couple of years ago. Now is the time to give ‘em a try. They are very similar profile to the Berger Hybrid but hopefully a true custom bullet will offer that bit more consistency.

It didn’t! My next shoot was a disaster. A best group of 13 inches! Having said that, it wasn’t a good day and of the half a dozen Dashers on the line, no one got below 7 inches. Time for a re-think.

Competition Improves the Breed
I mentioned that over half the field at the 1000yd World Benchrest Championships used the Dasher – what, I wonder, were those shooters feeding their wildcats…….

Fortunately, most benchrest shoots will publish an equipment list – which includes details of powder, primers, bullets, brass as well as barrel-makers, gunsmiths etc. This might seem counter-productive to some UK shooters – why give everyone else your secrets? They could beat you!

A long time ago, American benchrest shooters realised that ‘competition improves the breed’ – you only get better when you are pushed and this is proved time and again at the World Benchrest Championships when the American Teams usually pick up Gold – and often Silver and Bronze medals!

A scan of the equipment list revealed that most Dasher shooters favoured Hodgdon Varget powder, ignited by CCI 450 Magnum primers (I was using Federal primers). Of course, every barrel is different so actual powder charges are not given – it’s up to individual shooters to determine an accurate and safe load. But, my next competition is only a few days away and I only have one opportunity to test. 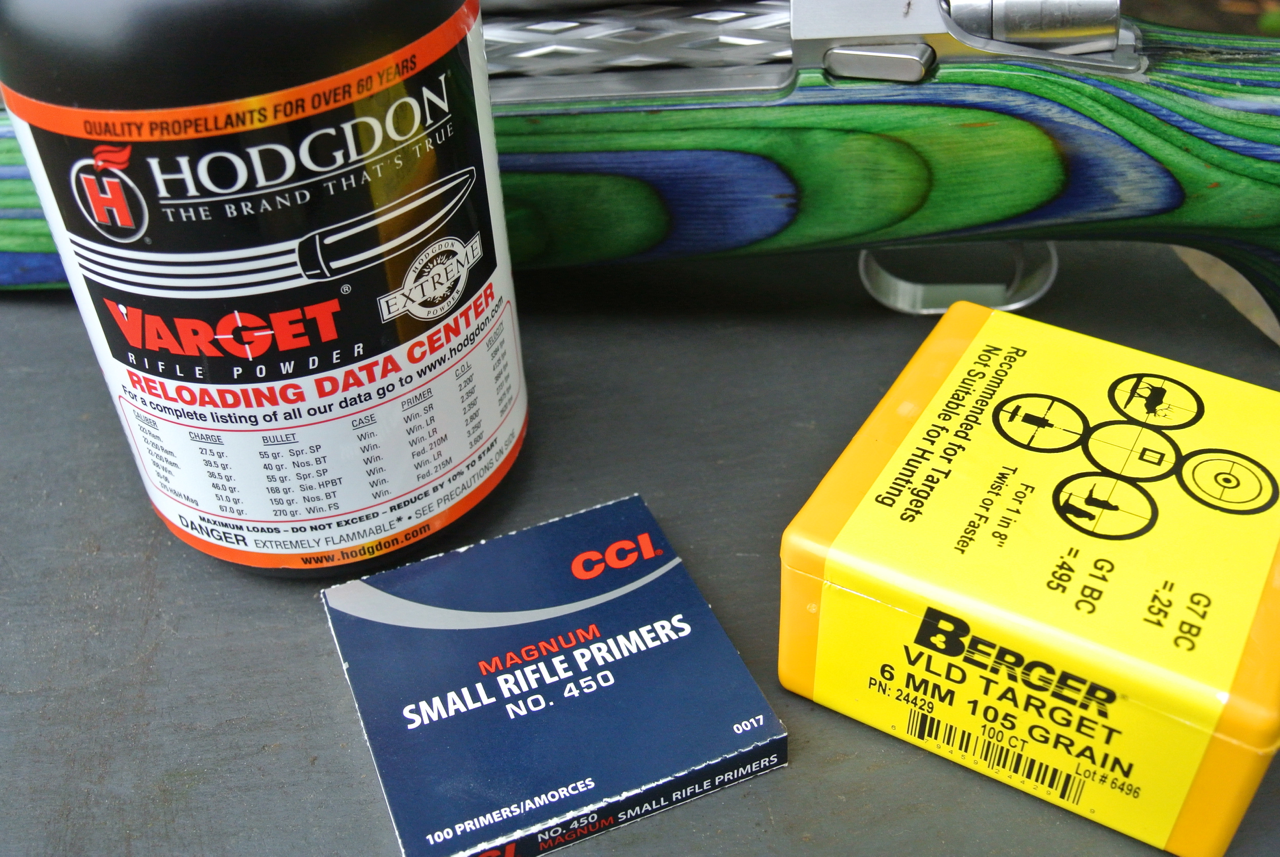 The Dasher case will hold around 35 grains of Varget so I’m guessing that around 34gn will be my max load. I’m loading three cases with each of the following – 31, 32, 33 and 34 grains. I’m hoping three-shot groups will at least give me an idea of the best load. Test day was not ideal with a blustry wind but my first group was tiny! Right away I knew I was on the right track. In fact, all four groups were superior to anything I’d previously shot at 100 yards but the 34gn load produced the dreaded ejector-pin mark on the casehead – looks like 33gn is my max! But with no further chance to test, which to choose? 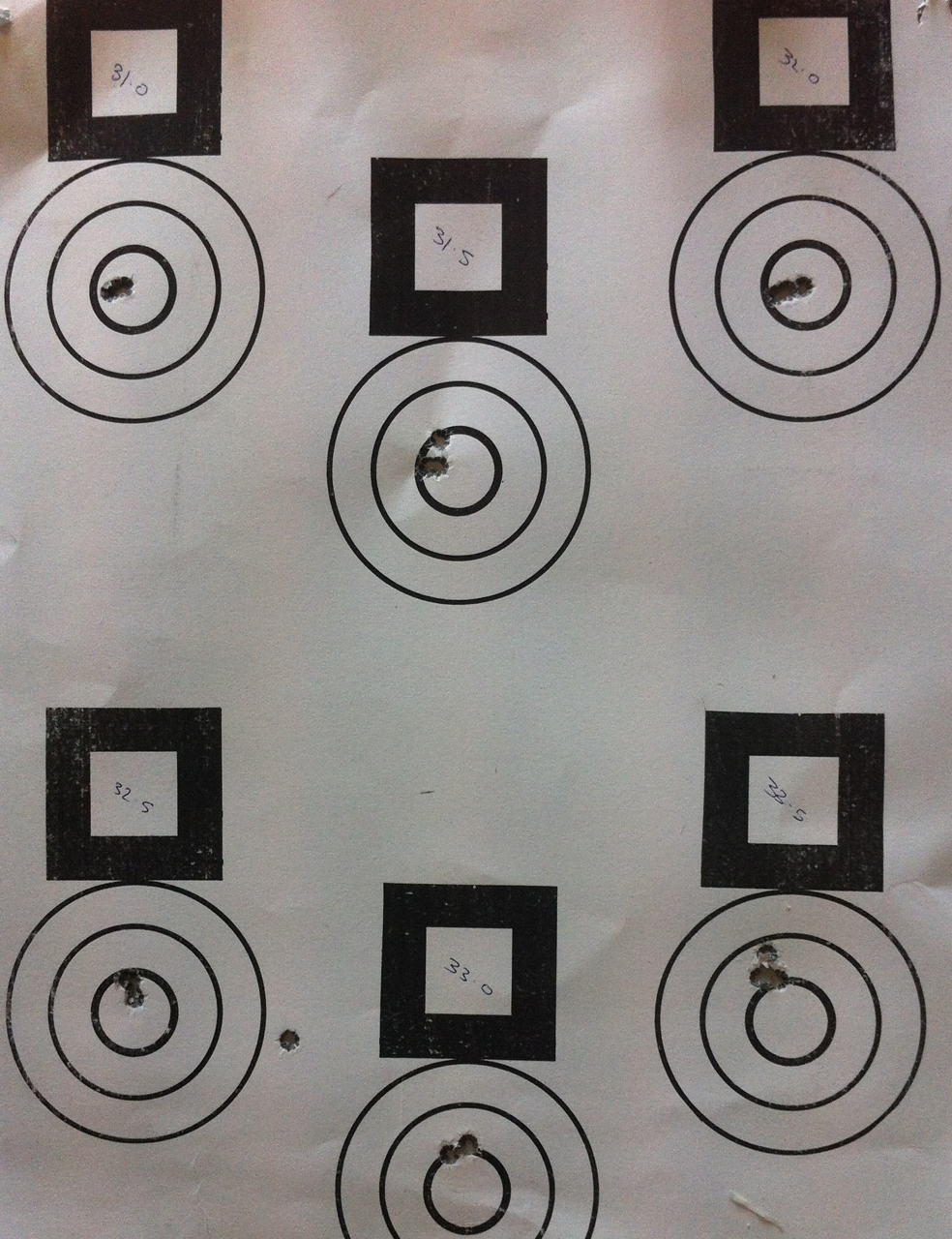 My 3-shot groups with Varget

I hadn’t bothered with a chronograph – I didn’t want to compromise accuracy by hanging the Magnetospeed off the end of the barrel – but I guessed that the best group (31gn) would be a little short on velocity. In the end, for the four 5-shot groups I’d shoot in competition, I settled on one at 31gn, two at 32gn. and one at 33gn.

Result!
Well, to cut to the chase, the 33gn load gave me a 4.7 incher – small enough to win the Light Gun small-group award so, I guess I’ve found my load – though further testing with seating depth and minor powder variation will continue.

Update
The little Dasher continues to impress with more small-groups and wins. I managed a smallest group at the Gelston competition in July with a 4.2 incher and Jeanette Whitney also won the Light Gun Match with a 6.25 inch agg. Jeanette also won the August Diggle comp. with a 5.099 inch agg and a best group of 4.29 inches.

The new Norma brass has made this fabulous little cartridge available to all. Reamers are available from Pacific Tool & Gauge www.pacifictoolandgauge.com with freebores ground to suit various bullets in the 95 – 105 grain range. Norma brass is imported by www.marchscopes.co.uk and Berger bullets from Hannams Reloading www.hannamsreloading.com Oh, you will also need a special shell-holder for your press – due to a slight variation in the case-rim – also available from March Scopes.