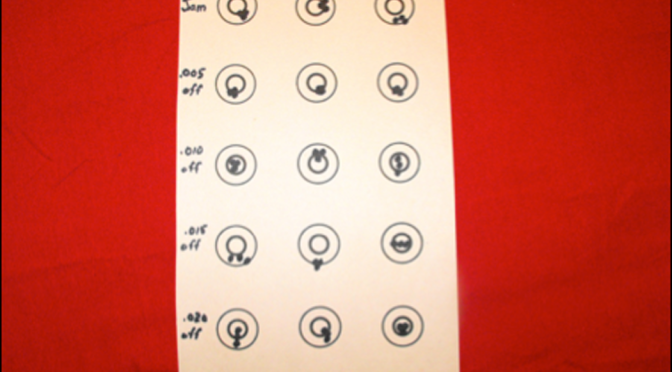 Target Shooter magazine is honored to have James Mock writing for us.  James is a former Precision Shooting magazine writer and is well known and respected for his knowledge and coverage of benchrest shooting in the USA.  We hope you enjoy his first article – Ed.

In 2010 I wrote an article dealing with tuning a benchrest rifle for short range shooting.  In this case, it featured a 6mmPPC and Jack Neary was the Hall of Fame (HOF) shooter who shared his methods of tuning. 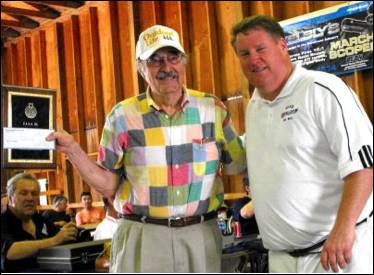 Jack is on the right and he is presenting Jim Carmichel with an award at the US Super Shoot.  Jack gives presentations about tuning rifles at many of the major shoots and the following is my effort to summarize one of his presentations.

The folks at Lapua/Vihtavuori realized that Jack was not only a great shooter but also a great ambassador for the sport and they agreed to sponsor his presentations.  The one from which I got the information for this presentation was at the NBRSA Benchrest Nationals held at DeSoto, Kansas in 2010.

What does it take to be competitive in today’s matches?

Jack begins to answer this question by talking about preparation of the 220 Russian brass from Lapua. Jack shoots a 6mmPPC (used by more than 90% of the competitors) which features a .263in. neck and the chamber is cut with a Henriksen reamer.

Since many shooters use a .262in. neck, the following data relates to that measurement.  After being told in 1999 by HOF shooter Bill Forrester to “cut thin to win”, Jack asked Bill what did he mean.  He went on to describe an ideal clearance in the neck of a chamber is at least .002 inches or two-thou.

Jack and his gunsmith, Dave Bruno, ordered a reamer with a longer than standard length.  The one they ordered featured a 1.525 inch overall length.  Their idea was to never have to trim their brass because most cases are about 1.495-1.510 inches after fire-forming. 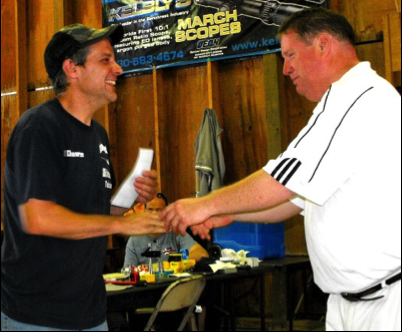 Jack admitted that this idea did not work and after extensive tests, he decided to trim his brass to 1.490 inches and to check them often and trim them back to that length.  He went on to say that even .002in. to .003in. differences in length can adversely affect accuracy.

Another point concerning brass is the shoulder set-back.  Jack recommends that the shoulder should be set back during sizing 0.0005in. to 0.001in.  If one sets his shoulder back too much, it is akin to fire-forming each time the brass is fired.

Also, the full-length sizing-die should match one’s chamber without over or under sizing it.  One method used by several top shooters to check sizing at the shoulder/body section is to lock one’s calipers at the shoulder on a fired case.  After sizing the locked calipers should slide down the body no more than 0.250in.  If it slides less that 0.125in., the die has not sized it enough and the case will be ‘tight’ in chamber and becomes a hindrance to those ‘running’ their shots.

Life is too short to tolerate a die that does not size brass to match your chamber.  Mike Ratigan recommends that one should throw it in the nearest lake!

Tuning loads for the match

When one gets a new barrel, the shooter needs to find how well it shoots before carrying it to a ‘big’ match.  The first item is to ‘fire-form’ the 220 Russian Lapua brass into the PPC case.  Jack recommends using a slightly reduced pressure for the first two firings.  Also, he recommends the use of oil on the cases to preclude the case from ‘grabbing’ the chamber walls and damaging the case.

After the two firings, one should uniform the primer-pockets and trim to the recommended 1.490in. length.  Jack does not recommend reaming or drilling the flash-hole.  His tests have shown that this not only fails to help accuracy but it actually hurts it.  Jack uses only Vihtavuori N133 powder.  He does not weigh his charges at a match but uses a powder-measure that he trusts.

For his tests he selects a target that has three bulls across by six down, i.e, a 3 x 6 grid.  I have a recreation in the photo below. 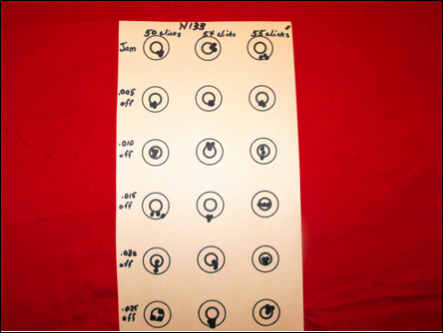 The tests consist of firing 3-shot groups, with three different charges and six different seating depths. Care is taken to shoot each group with a maximum of two ‘hours’ of flag movement (both in direction and intensity).

Along with the size of the group, Jack looks for a seating-depth that will shoot the light (50 clicks) load, the medium (54 clicks), and the hot load (55 clicks) into the same relative position on the target.  In the picture above, the three groups shot at 0.005in. off ‘jam’ illustrates this.

After this test, the shooter can tweak his loads with minor changes in powder-charge and/or seating-depth.

Since Jack does not weigh charges, he realizes that his loads are based on volume.  Density changes with temperature and a load that may work well in the cool morning may not work when the temperature rises at noon.  The shooter must watch the targets and increase his setting on the powder-measure if he thinks that load is too mild because of powder expansion in the measure.

‘Reading’ a target is very difficult and it takes time to develop a sense of what to change and how much to change.  Jack maintains that a load that is too light will show vertical and, as it is increased, it will become round and if one keeps going up on the charge, the load will again show vertical…with a tendency to spit bullets low.

Many short-range benchrest shooters shoot too hot.  If you think that you have a load that is too hot and your first shot goes lower than expected, try not to shoot any that are lower than that first one. Hold only one-half as much down as required to hit that hole….since the next shot will probably not shoot as low as the first.  Then, adjust the load for the next relay.

Target management is also very important for successful shooting.  The sighter target has three bulls and they should be used wisely.  Every shot should have a purpose.  If the wind is blowing from right to left, one should use the right target so the impact will be toward the middle and vice versa for a left to right wind, i.e. the left sighter should be used.  The middle sighter should be saved for emergencies. That is, if the shooter needs to return to the sighter after starting the record group, he will have the ‘clean’ middle sighter on which to shoot.

For the following tip, Jack credits HOF member Mike Ratigan.  When shooting at 200 yards in a strong cross wind, the shooter should not hold a center hold and risk shooting outside the boundary.  Also, changing the windage setting can be very dangerous because your bullets travel into the wind.  The shooter should aim at the outermost ring (at 9 0’clock for a left to right wind and 3 o’clock for a right to left wind).  Trying to hold on an intermediate ring during the seven minutes match time can lead to disaster.

This tip is from the late Perry Morton (also a HOF member).  When the mirage is so bad that one cannot see the rings on the target, choose another aim-point.  The vertical crosshair can be aligned with the black ‘box’ above the mothball and the horizontal one can be placed between two of the black bars on the mirage board.  This method has saved many shooters from a disasterous group.

Many shooters think that a load that shoots ‘flat’ or horizontal groups is well tuned.  Since horizontal groups normally measure large, one should tune his load so that it is not too wind-sensitive.  A load with a little vertical (1/2 bullet @100 yds. and 1 bullet @ 200) seems to ‘buck’ the wind better than those with no vertical.

Jack holds at 6 o’clock on the mothball and likes his bullets to strike point of aim. His reasoning is that it is easier to chase an errant shot with this zero than it is with any other.  Although some avoid shooting out their aim point, he reasons that if one is aiming that fine, he/she is squandering time when the conditions are to your liking.

It has been observed that many fine groups are ruined by the last shot.  Normally, this shot goes low and Jack states that he allows for this at 100 yards.  He holds a little high for that last shot.  Do not let your last shot be your lowest shot.  Holding up to 1/2 of a bullet high will not hurt your group as bad as one that drops out the bottom.

Many of the top shooters do not return to the sighter after starting their record group.  With experience a shooter can make the necessary adjustments while running his group.  Of course, any shooter must stop when there is a major switch in the flags.

During a ‘warm-up’ match, or on the first match (which is normally 10 minutes) test your loads.  By taking two or three different loads to the bench, it’s possible to get an idea of what to shoot on the record target.  The sighters for the second target should test the conditions.  The shooter should know how much a certain wind is moving his bullet.  Go to the record target with confidence and shoot your group without returning to the sighter (if possible).

Let me close by saying – have fun at a match.  When you are successful be gracious in winning but when you are not, be sure and congratulate those who won. 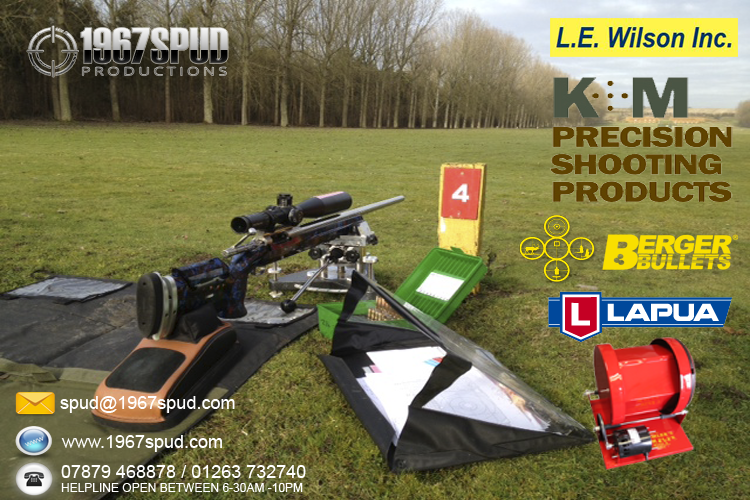